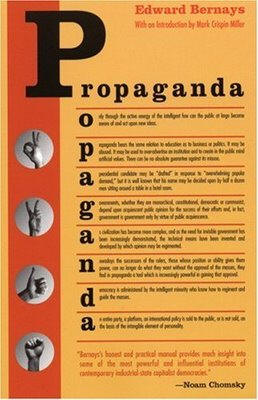 Edward L. Bernays was an American business consultant who is widely recognized as the father of public relations. Bernays was one of the men responsible for “selling” World War 1 to the American public by branding it as a war that was necessary to “make the world safe for democracy”. During the 1920s, Bernays consulted for a number of major corporations, helping to boost their business through expertly crafted marketing campaigns aimed at influencing public opinion.

In 1928, Edward Bernays published his famous book, Propaganda, in which he outlined the theories behind his successful “public relations” endeavours. The book provides insights into the phenomenon of crowd psychology and outlines effective methods for manipulating people’s habits and opinions.

(The book will be made available to read online soon).