Between 1855 and 1865 a widespread epidemic among silk worms called pebrine alarmed the south of France, so much so that finally, in 1865, it drew national attention.

Professor Bechamp, early in 1865, took up the study of this epidemic entirely at his own expense, and without the aid of others, and quickly found it was caused by a small parasite.

His long experience with small micro-organisms, and the way creosote had inhibited their growth in his Beacon Experiment of 1854 and 1855, at once suggested the way out.

Hence he was able to state before the Agricultural Society of Herault the same year that pebrine was a parasitic disease and that thin creosote vapour would prevent the attack of the parasite.

However, in the meantime, the Government had taken an interest in the subject, and in June 1865 sent Pasteur down to investigate the disease.

Pasteur, with the prestige of being an official representative of the government, was able to centre all attention on his own work, to the depreciation of the work of others, though he admitted having never touched a silk worm before he started on this mission.

Nevertheless, the fact that something ‘official’ was being done caused agricultural societies to await his verdict, instead of at once taking up Professor Bechamp’s ideas.

Pasteur’s first statement on his new subject was made in September 1865, when he published a very erroneous description, claiming:

“The corpuscles are neither animal nor vegetable, but bodies more or less analogous to cancerous cells or those of pulmonary tuberculosis. From the point of view of a methodic classification, they should rather be ranged beside globules of pus, or globules of blood, or better still, granules of starch, than beside infusoria or moulds … It is the chrysalide rather than the worm, that one should try to submit to proper remedies.”

This description shows that he had no conception of the real nature of the problem.

“Thus this chemist, who is occupying himself with fermentation, has not begun to decide whether or not he is dealing with a ferment.”

Pasteur, about this time, dropped his work because of the deaths of his father and two of his daughters, and before going back, spent a week at the Palace of Compiegne as the guest of Napoleon III.

In February 1866, he again took up the poor silk worms’ troubles and had the assistance this time of several able French scientists, yet they made very little progress on the problem.

Meanwhile, Bechamp had made further studies on pebrine, and sent a paper entitled On the Harmlessness of the Vapors of Creosote in the Rearing of Silk Worms to the Academy of Science.

In this article he repeated the statements he had made before the Agricultural Society at Herault and added that:

“The disease is parasitical. Pebrine attacks the worms at the start from the outside and the germ of the parasite comes from the air. The disease, in a word, is not primarily constitutional.”

He described developing the eggs or seeds of the silk worm in an enclosure permeated with a slight odour of creosote, in which he produced eggs entirely free of pebrine, and it took so little creosote that his methods were commercially practical.

However, Pasteur had not yet found the true cause of the trouble. He sent a paper entitled New Studies on the Disease of Silk Worms to the Academy, in which he said:

“I am very much inclined to believe that there is no actual disease of silk worms. I cannot better make clear my opinion of silk worm disease than by comparing it to the effects of pulmonary phthisis. My observations of this year have fortified me in the opinion that these little organisms are neither animalcules nor cryptogamic plants. It appears to me that it is chiefly the cellular tissue of all the organs that is transformed into corpuscles or produces them.”

But again he guessed wrong, and neither he nor all of his assistants could prove statements that were false.

He also took a slap at Bechamp’s paper by saying:

“One would be tempted to believe, especially from the resemblance of the corpuscles to the spores of mucorina, that a parasite had invaded the nurseries. That would be an error.”

And yet Bechamp had already proved beyond question that it was nothing else but a parasite! Possibly, jealousy caused Pasteur to take a contrary view.

Pasteur, apparently, had not finally given up his “spontaneous generation” ideas until 1862 or 1864, and since then, had ascribed all signs of fermentation, and all disease, to airborne germs, yet here he denies that this disease is parasitic! And after Bechamp’s papers proved it!

Bechamp answered him in a paper entitled Researches of the Nature of the Actual Disease of Silk Worms which contained more proofs of its parasitical nature.

He said that the vibrant corpuscle:

“… is not a pathological production, something analogous to a globule of pus or a cancer cell, or to pulmonary tubercles, but is distinctly a cell of a vegetable nature.”

In another paper Bechamp described experiments that proved the corpuscle to be an organized ferment that would invert sugar, and produce alcohol, acetic acid, etc.

This paper seemed to convince Pasteur that Bechamp was right, for in January 1867, in a letter written to Durny, Minister of Public Instruction, he began to claim all credit for Bechamp’s ideas on the silk worm diseases.

Bechamp provided a still more complete account of his discovery which the Academy printed on April 29, 1867, and the same issue contained a letter from Pasteur to Dumas, dated April 24, in which he expressed regrets over his “mistakes” and promised a paper with a complete story of the disease soon.

On May 13, 1867, Bechamp sent a letter to the President of the Academy of Science pointing out Pasteur’s errors and asking recognition of the priority of his own discoveries regarding silk worm diseases. He also sent another paper entitled New Facts to Help the History of the Actual Disease of Silk Worms and the Nature of the Vibrant Corpuscles.

In this paper he described the corpuscles as airborne and to be found on mulberry leaves, and he also described a second silk worm disease different from pebrine, which he called flacherie, and on which he had published a pamphlet privately, on April 11, 1867.

In the meantime he had also submitted several papers on various microscopic organisms, more or less broadening the general knowledge on this subject; one of which was a general study of bacterial development from his microzymas.

In a paper entitled On the Microzymian Disease of Silk Worms Bechamp gave a full description of this second disease called flacherie. This was published in the paper dated June 8, 1868, and on June 24 Pasteur wrote to Dumas claiming to have been the first to discover this second silk worm disease and demanding that a note he claimed to have sent to the Agricultural Society of Alais on June 1 be printed (as the records then contained no proof of Pasteur’s claim to this).

Bechamp answered this claim in a note entitled On the Microzymian Disease of Silk Worms, in Regard to a Recent Communication of M. Pasteur, which was published under the date of July 13, 1867, in which he referred to his pamphlet of April 11, 1867, (revised and reprinted March 28, 1868) and his papers of May 13 and June 10, 1867, all of which were prior to any publication of Pasteur’s!

However, Pasteur used his prestige as a Government representative to brow-beat others into coming to his support, and he was finally widely recognized, and Bechamp’s claims as to the discoveries on silk worm diseases ignored. The majority of those who knew his claims were false were afraid to oppose anyone who was so close to Napoleon, and who had so much official standing as Pasteur then had.

In his book on the diseases of silk worms, Pasteur takes all the credit for these discoveries, and shows how ignorant of the subject he still is by ridiculing Bechamp’s statements that creosote was a preventative – so he knew of them!

Miss Hume says that members of the Academy actually asked Professor Bechamp to drop his use of the word microzyma, and even to drop his work!

In Microbe Hunters, Paul de Kruif gives a slightly different version of Pasteur’s work on silk worms from that outlined above. He states that Dumas, his old professor, appealed to Pasteur to help the silk worm growers of southern France, and continues:

“Anything but a respecter of persons, Pasteur, who loved and respected himself above all men, had always kept a touching reverence for Dumas. He must help his sad old professor! But how? It is doubtful at this time that Pasteur could have told a silk worm from an angle worm! Indeed, when he was first given a cocoon to examine, he held it up to his ear, shook it and cried: ‘Why there is something inside it!'” (p.91.)

De Kruif also ascribes the belated discovery that pebrine was a parasitical disease to Gernez, one of his assistants, and says:

“Gernez hurried to Pasteur. ‘It is solved,’ he cried, ‘the little globules are alive – they are parasites! They are what makes the worms sick!’

It was six months before Pasteur was convinced that Gernez was right, but when at last he understood, he swooped back to his work, and once more called the committee together.

‘The little corpuscles are not only a sign of the disease, they are its cause. These globules are alive, they multiply, they force themselves into every part of the moth’s body.'” (p.95.)

It is strange that with the dispute raging between Bechamp and Pasteur over who had discovered that pebrine was a parasitical disease, Gernez did not speak of his own claims in the matter – possibly a job was more important.

“He was forty-five. He wallowed in this glory for a moment and then – having saved the silk worm industry with the help of God and Gernez – he raised his eyes toward one of those bright, impossible, but always partly true visions that it was his poet’s gift to see. He raised his artist’s eyes from the sickness of silk worms to the sorrows of mankind:

‘It is in the power of man to make parasitic maladies disappear from the face of the globe, if the doctrine of spontaneous generation is wrong as I am sure it is!'” (p.97.)

His forty-fifth year must have been 1867, and Bechamp had proven spontaneous generation wrong in 1855 or ’56, as described earlier, at least 10 years beforehand.

Clearly de Kruif did not look far enough; the name of Bechamp, the greatest of all, and the only ‘microbe hunter’ who really understood their true place in nature, does not appear in his book Microbe Hunters at all!

In spite of all his errors in the work on silk worms, and because of his high position and royal favouritism, Pasteur was put in charge of the practical measures of fighting this parasite, and of course did not adopt Bechamp’s method of using creosote vapour.

“That is the way in which Pasteur saved sericulture! The reputation which he still preserves in this respect among ignoramuses and short-sighted savants has been brought into being:

Plainly his sins found him out here – at least with those who were in closest touch with the silk worm cultivators!

It is astonishing, in view of such a failure – and after Bechamp had shown how to prevent these diseases – that Pasteur’s reputation did not go down in a public scandal!

Apparently royal favour and the academies and public bodies protected him from this. 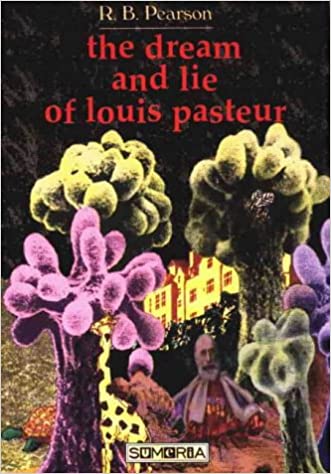