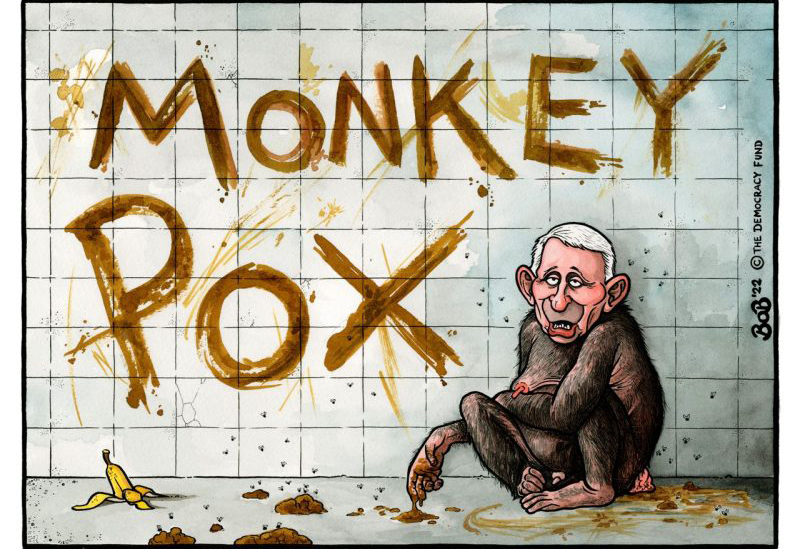 Have you heard? Scamdemic 2 may be just around the corner. Recently, there’s been a wave of hysterical nonsense in the media about “monkeypox”, an alleged infectious disease that resembles smallpox (more on that soon).

I’m not going to do a detailed recap all the media hysteria here (because OffGuardian have done a great job of that already), but here’s a brief summary:

So, the question is: what’s going on? The speed at which “monkeypox” cases have begun to be reported on in the media is astonishing, leading some to think that this might be the next stage of the Covid PsyOp. “Monkeypox” doesn’t exactly have a great ring to it, though. They’ll need a catchier name. Something like “Mpox”, or “Povid-22” (poxvirus disease 2022).

And are cases of “monkeypox” really increasing? If so, is it being caused by the Covid injections? (obviously not, you povidiot!). Realistically, it’s too early to tell where this is all going.

One thing that is for certain, however, is that this, just like Covid-19, is a complete scam. You see, what made Covid different was that it was supposedly a “new” virus/bioweapon/whatever. Monkeypox, on the other hand, is NOT a new disease, it’s a very, very old disease, one which we know a great deal about.

Monkeypox is, for all intents and purposes, another name for smallpox, the disease that plagued Europe during most of the 19th century.

In fact, a document prepared by the Australian Department of Defense states that “Monkeypox infection is rare but may clinically resemble smallpox“. And you’ll never guess how monkeypox is diagnosed! That’s right, through PCR testing (you know, those super accurate tests that detected Covid in goats and pawpaws). Even the WHO admits that these monkeypox tests are “usually inconclusive”, at least that’s what their fact sheet said when I looked at it (don’t worry, I’m sure they’ll update it in due course).

In case you didn’t know, there are other “pox” diseases, too, such as “buffalopox”. However, like I mentioned, there’s a case to be made that all of these are simply different names for smallpox (because, that was “eradicated”, remember?).

Solution? Just call it monkeypox. Want to make something go away? Just change the name. Remember when “mRNA vaccines” were called “gene therapies”? Remember when “accute flaccid paralysis” was called “polio”? Ah, the power of words. Edward Bernays would be proud (what’s the opposite of rolling over in your grave?).

Back in September of last year, I conducted a detailed investigation into the 19th century smallpox epidemics. I suggest that you read that article in detail (if you haven’t done so already), because in there I make the case that 1) smallpox was/is not caused by a virus; and 2) smallpox was not eradicated by vaccination.

Not only that, I expose the fact that the hero of the smallpox saga, Edward Jenner, was a Freemason who carried out cruel experiments on neighbouring children (including his invalid son!); A fitting character on which to bestow the title of “father of modern preventative medicine”, don’t you think?

Anyway. Here are some important quotes that I pulled out from my investigation mentioned above:

No rational theory ever has been or can be advanced to support the ridiculous assumption that Vaccination protects from small-pox. One thing only is certain; thousands of children are killed annually by Vaccination, or its after results, and these victims of medical ignorance and folly are the only persons of whom it can be asserted with truth that vaccination protected them from small-pox.

There is nothing eccentric in my objection to the dangerous and grossly unscientific operation called vaccination. Within my long life-time, its ruthless enforcement throughout Europe ended in two of the worst epidemics of smallpox on record, our formerly more dreaded cholera and typhus epidemics having meanwhile been ended by sanitation […] At present, intelligent and instructed people do not have their children vaccinated, nor does the law now compel them to. The result is not as the Jennerians prophesied, the extermination of the human race by smallpox: on the contrary, more people are now killed by vaccination than by smallpox.

It will be found by careful observation that whenever a vaccinator or corps of vaccinators set out upon a vaccinating crusade, there follows very generally a number of deaths from erysipelas and other maladies which have been induced by the operation, and companied by suffering of the most heartrending character.

Smallpox eruptions are a sign of rapid elimination of hereditary and acquired disease taints. A good dose of smallpox may rid the system of more scrofulous, tuberculous and syphilitic poisons than could otherwise have been got rid of in a lifetime. Therefore smallpox is certainly to be preferred to vaccination. The one means the elimination of chronic disease, the other the making of it.

(This last quote is particularly pertinent, for, if the naturopathic theory of smallpox is correct, i.e., that it’s an extreme process of detoxification/elimination, then a rise in cases would make sense considering the great poisoning that humanity has recently been coerced into enduring.)

When/if media coverage of “monkeypox” begins to increase and the WHO begins to talk about masks, lockdowns and vaccines, we’ll be ready. We’ll be armed with the facts and the foresight to stop this next scamdemic dead in its tracks.

If you’re unsure of what to do, start by reading, and then sharing, my smallpox article with as many people as you can. Let’s cut the head off this beast before it takes another step.

The Blockchained Society: Web 3.0, Virtual Reality and the Network State

Google is the largest and most used search engine in the world with a desktop market share of over 85%! Data from Google Trends shows a marked increase in people searching for "death after vaccine" immediately after Covid-19 injections were rolled out around the...

A couple of weeks ago I posted an interview with Dark Journalist and Dr. Joseph Farrell about the possibility of an upcoming manufactured UFO threat. In the intro to that post, I mentioned a UFO researcher by the name of Richard Dolan who is undoubtedly familiar to...